The Great Plate Count Anomaly is that not every microbe that we can detect — e.g. via direct staining — can be grown on petri dishes. This anomaly was first described in 1985, although observations describing this phenomena date back to 1932 from freshwater habitats and 1959 from marine environments (as reported in Staley and Konopka).

More recently, the role of the microbiome or microbiota has become dominant in everything from human health and disease to agriculture to lifestyles.

The concept of the microbiome or microbiota is not new – it has been around for at least 60 years. However, the application of cheap DNA sequencing to microbial environments has completely altered our understanding of the three fundamental questions that metagenomics addresses: What is in the environment, what are they doing, and how are they doing it.

As sequencing became cheaper, data sets grew, and more samples could be sequenced for each environment. This lead to the ability to cross-compare similar samples from different environments, and through using savvy statistics we are able to capture complete genomes from metagenomics samples.

Throughout the course, we will work through several of these analyses, from simple samples where we identify the organisms that are present, through combining complex samples to identify complete genomes.

The term metagenomics was original coined to describe cloning genes from the environment, particularly from soils (Handelsman et al., 1998)]

As shown in Fig. 3 of that paper, the concept is to clone fragments of DNA into bacterial artificial chromosomes, essentially low copy number plasmids that can hold large pieces of DNA and then use those fragments to select for a desired biological activity.

Thought Experiment: Why use bacterial artificial chromosomes that can hold long pieces of DNA rather than just clone short fragments of DNA into, for example, high copy number vectors?

Thought Experiment: How could you find a piece of DNA encoding a particular gene if that gene did not have a biological activity that you could select for? (Clue: what is the difference between a genetic selection and a genetic screen?)

The small subunit of RNA polymerase contains both RNA and protein. This complex is essential for life in DNA-based organisms as it is involved in transcribing DNA into RNA, the first step in the central dogma. RNA polymerase was probably one of the earliest complexes to evolve, soon after nucleic acid chemistry evolved in the primordial soup. RNA polymerase was probably predated by ribonucleotide reductase, which converts RNA monomers to DNA monomers, and these were probably both preceded by RNaseP, a ribozyme that catalyzes the cleavage of RNA. Even the primordial soup was competitive: RNaseP probably evolved to eliminate competitive RNA molecules, which then escaped by being converted to DNA, but the DNA needed to get back to RNA to be active!

Carl Woese and colleagues at the University of Illinois in Urbana Champaign were among the first to propose that the subunits of RNA polymerase could be used for phylogenetic purposes and using the 16S gene lead Woese and Fox to first recognize the three domains of life, in what has been called the most important paper in

In follow up papers, Woese and colleagues expanded their ideas and demonstrated the relationship between the three domains 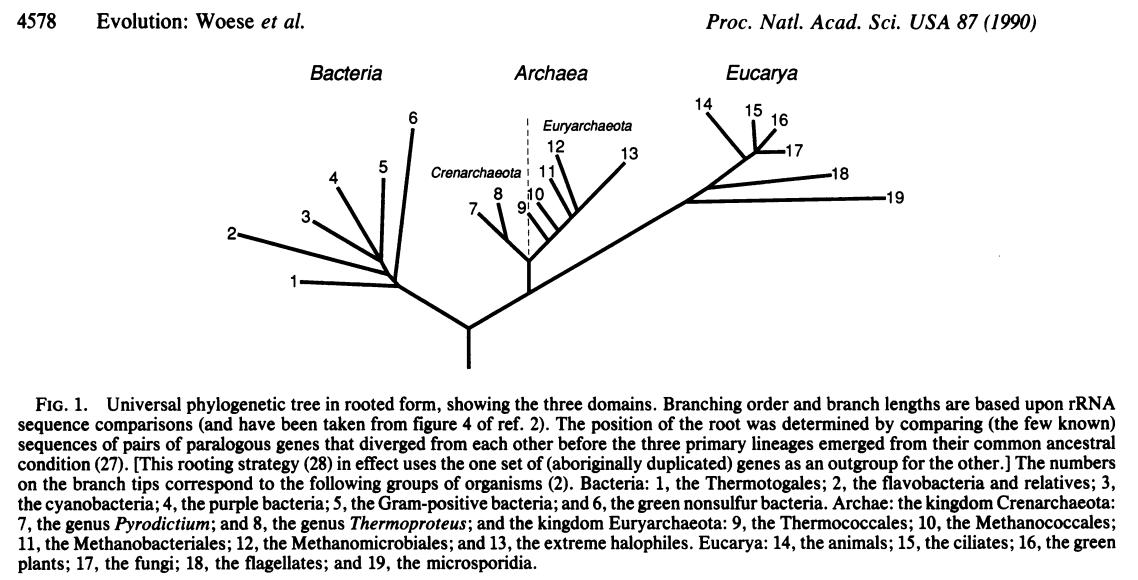 Subsequently, Norman Pace (who earned his PhD from the University of Illinois at Urbana Champaign in 1967) and colleagues used 16S sequences to characterize microbes from the marine environment. Soon after, both Jed Fuhrman and Ed DeLong identified the abundant Archaea in the marine environment, suggesting that they were not restricted to the extreme environments where they had originally been isolated.

However, the use of shorter sequences, especially from the Illumina platform, requires the use of primers that amplify a shorter region. The current “standard” region that is amplified and sequenced is the  515f-806r region. You can find the current recommended PCR protocol on the Earth Microbiome Project website Their recommended sequencing primers are: GTGYCAGCMGCCGCGGTAA and GGACTACNVGGGTWTCTAAT

Thought experiment: Choose a 16S sequencing paper at random, provided it has a principal components analysis (PCA) type of analysis. How much of the variance does the 16S sequences explain?

Each database has pros and cons, and will give you slightly different taxonomic resolution. However, for most next generation sequencing studies, you get to phylum level, or thereabouts when you compare short fragments of the 16S sequence with these databases.

Thought Experiment: What is the most different eukaryote from humans you can envision that is in the same phylum as us (hint: we are in the Chordata phylum)

Isolating bacteria from the environment is hard, and scientists, especially scientists that know how to program computers are inherently lazy1.

It’s not entirely true that all scientists are lazy! There are many cases where people were interested in sequences from the environment, but those organisms were hard to isolate. For example, many of the early metagenomics papers focused on viruses, because we had a very incomplete notion of viruses in the environment, were not sure what their hosts were, and did know how to culture them.  In those cases, especially, sequencing environmental DNA in bulk and then using computers to solve the problem became an obvious way to avoid isolation and culturing.

However, sequencing is not free (yet) and the computational issues are not solved. Back in the early days of metagenomics, sequencing was more expensive and the computational issues had not begun to be addressed. The SEED group at the Fellowship for the Interpretation of Genomes (FIG) was a collective of researchers in Chicago, Wisconsin, San Diego, and elsewhere. We were building the SEED platform and the Rapid Annotation using Subsystems Technology (RAST) that were designed to annotated complete microbial genomes (see the discussion of databases below). At the same time, we were also sequencing environmental microbial samples and trying to annotate them. By leveraging subsystems we were able to reduce the complexity of the data: rather than trying to explain tens or hundreds of thousands of protein functions, we could summarize those into a few subsystems that we could understand.

By the end of 2007 there were almost 100 random metagenomes that had been sequenced using pyrosequencing. At that time, we were running blastx against the NCBI non-redundant database (see databases below) and summarizing the data using subsystems. In our discussions it became obvious that this was the first time we had a consistent set of metagenomes from diverse environments all treated the same way. We reanalyzed all the data using the same version of the database, annotated using the same approach, and compared all the subsystems across metagenomes. This became the nine-biomes paper published in Nature

Notice that in this comparison the first two components of the Canonical Discriminant Analysis (CDA; similar to PCA) explain ~80% of the variance of the data. In this case, we have 30 variables (the level 1 subsystems) that we are using to explain the 9 biomes.

There are several ways to annotate metagenomes, many of which we describe here, including:

1This is not just our opinion: see, for example, the three virtues of a great programmer